Ok, let’s be honest for a second. When you hear the phrase “security system”, what do you think?...

Until about three weeks ago I pridefully thought they were wimpy. I know, I know, you’re thinking, “what kind of jerk is writing this article?!”, but hey!!, I thought we were being honest.

To explain, I am a frugal person and always thinking that anything beyond the “basics” is excess and a waste of money. I recently got married and moved in with my husband and out of a house of five girls. Three weeks ago, that very house I lived in was broken into and robbed. The front window was broken, four laptops stolen, a $3,000 camera, jewelry, clothes, and family mementos...all just completely gone. It was crazy. Unbelievable. It happened...the thing you pray never happens and the thing I, ignorantly, thought would never happen to me or my friends: a real, scary robbery.

Since that devastating night I have looked around and done some research about security systems through My Utilities. The girls actually had a security system at their house that night, they just didn’t have it turned on. A perfectly good system was set up and ready to alert the cops and nab the thieves; but it was turned off, leaving the girls dead in the water and now without thousands of dollars worth of belongings. I don’t blame the girls though, that thing was beyond obnoxious. It was a tiny screen that you could hardly read and every time you tried to turn it on or off you had to press a million buttons. To top it all off the person who installed it put it down the hall by an exit that nobody ever used. The girls decided to simplify the system and just set it before they went to bed.

So from a person who thought security systems were wimpy and a waste of money, I fully admit I was wrong! After researching, I found that security systems are not only a good use of money and worth every penny, but many of them are actually very reasonably priced. With the technology embedded in systems like ADT and 2 Gig, it is insane how much they offer for the price. The price point for home safety is, at this point, priceless but they also help you save money in the long run by giving you remote access to your lights, fans, AC, and heat and alert you to smoke, carbon monoxide, and flooding. Not to mention, many homeowner or renters' insurance companies offer a rate reduction for having an installed security system. 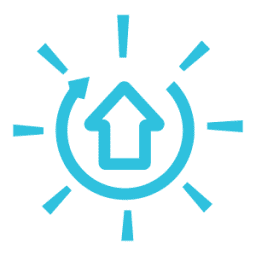 It's about to get really hot; are you ready??